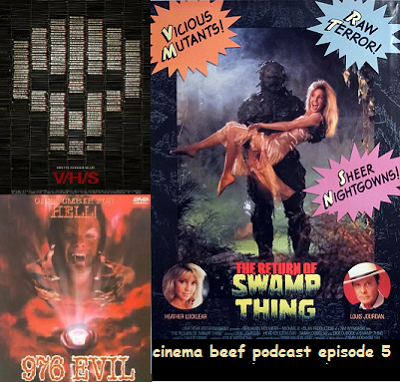 We're back again and I can't believe people are still listening after 4 episodes. With me this week is none other than the co-host of Moviecopia!, Jesse Bollinger. On this edition, we discuss misogynistic dudes, awkward sexual activities, and I feel we learned something about one another after it was all said and done. We also discussed three films! I take on the found footage anthology film VHS. Jesse attacks and generally does not like 976-Evil. Finally, we both love that gigantic pile of moss in Return of Swamp Thing. So gather your commandos, always rewind your tapes and always be wary of random phone calls that you know you shouldn't answer but can't resist. Could be a bill collector or some thing even worse like a mother-in-law! Thanks for listening.

Show art created by Iris Saravia.  Thanks for everything, doll!


Posted by cinemabeefpodcast at 9:08 AM No comments:

Those damn teenagers are bleeding on my lawn again! 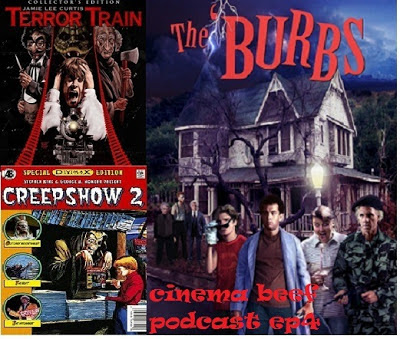 Episode 4 is here and it is a great one.  I had the pleasure of conversing with Mr. Johnny Krueg!  We talk about Terror Train, Creepshow 2 and Mr. Krueg's favorite The 'Burbs!  We also talk about several other films and go into several tangents.  So watch out for stray hitchhikers, don't dump on the geek and steer clear of the neighbor's dog shit.  And always, run the other way when you see random floating black slicks inside fenced in lakes!


Get your Krueger Nation fix here!
Get some Cadaver Indies here!
Join the Corpse Cast group!
Contact Johnny on Twitter @johnnykrueg and on Facebook as Johnny Krueg

Posted by cinemabeefpodcast at 5:13 PM No comments: 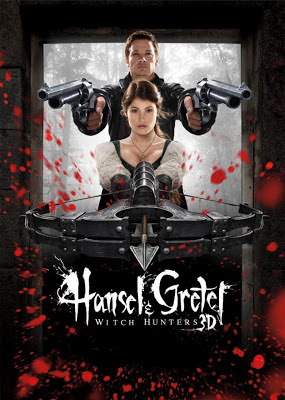 Hey folks!  This my first written review and I am sure there are more to come.  I heard this film coming through the wire and I had little or no expectations for it.  Then I saw the trailer and I changed my mind pretty fast.  First of all, you got Jeremy Renner as Hansel, who has solidified himself as an action star in films like Mission Impossible: Ghost Protocol and The Bourne Ultimatum.  It had Gemma Arterton as Gretel, who I remember most as Nick Frost's sexy boat skank from Pirate Radio.  She also got her feet wet in such films as Prince of Persia and Clash of the Titans (2010).  It also features Famke Janssen as the big bad witch Muriel.

The film starts as a young Hansel and Gretel are led into the woods by their father and are abandoned never knowing why.  They wander further into the woods and come upon house made out of candy just the like the original story.  They are soon captured by an old witch and Hansel is caged being force fed candy to fatten him up as Gretel is forced to help her prepare for her feast.  They're skills are soon learned as Hansel escapes from his cage and attacks the witch and that him and his sister are immune to her charms and powers.  They promptly fuck her up and toss her in the oven just like in the story.  After this, during the opening credits, you see in the newspaper clippings that the duo have taken a trade in going from village to village taking out many other witches and collecting big bounties.

The actual film  starts in the village where they came from.  They are sent for to find a coven of witches who are stealing children.  They are immediately opposed by the town sheriff and his officers.  They don't care because they know they're shit. They stop him and his g-men from killing a supposed witch right when they appeared on screen.  After the sheriff's lackeys go out to the woods to get the bounty first, they are brutally attacked by they witches and are all but one taken out pretty easily.  This is when the experts have to spring into action.

I don't want to get into too much more of the plot because I don't want to ruin it  for anyone else.  It was filled with CG effects but it was neccesary to pull off what they did for this film.  For those who don't like CG blood, this isn't the film for you if you are going to nit pick.  Hansel and Gretel are  about as cool as any action heroes as I've seen.  They explode on screen with their cool weapons and kick ass moves.  The witches make up and flying moves are pretty awesome. It is hard to make Famke Janssen ugly and they pulled it off pretty well.   I know this all stuff we have seen before but not like this in my opinion.  They had gruesome kills in this film including a drawn and quartered dismemberment, head smashes and other cool things that has to be seen to be believed.

One of my favorite characters in the film was the Edward the troll.  He was the witches lackey who was their muscle and he collected the kidnapped children.  He eventually becomes friend to Gretel and her muscle with awesome brutal force.  I wish I would have seen this in a 3D theater because I think the effects would have really popped.   Alas,  it was playing at the local discount theater and I am glad I went because I had a great experience.  I don't think this is a great film by any means.  If you want to be entertained with tons of eye candy and amazing effects, give this one a rent when it comes out.  I am going to buy it when it comes out.  I enjoyed it that much.

Grade B
Posted by cinemabeefpodcast at 6:14 AM No comments:

And I would have gotten away with it too if it wasn't for that meddling rock god! 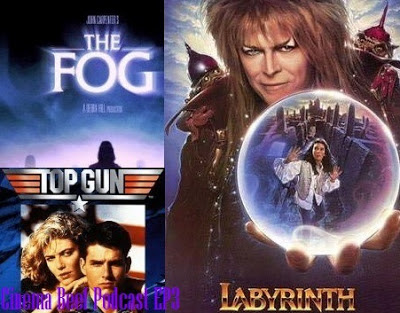 I'm back again and this time with someone much smarter than myself, Iris of Moviecopia! Podcast!  We discuss Navy stories, Bowie!, and the my love for Adrienne Barbeau but my hatred for Stevie Wayne!  Come and join the fun and hopefully we can keep the noise down to a minimum.

Get our shenanigans here!
Hungry? Get the feed here!
If you want to be a guest on the show or have comments or suggestions for films for the show, click here!
Join the Facebook group!

Posted by cinemabeefpodcast at 10:00 AM No comments:

Well we are back again people.  Thanks to those who encouraged me.  Why do you people do these things?!?!  On this episode, The Terror Troop Podcast's own "Wildman" Willis joins me on this magic carpet ride.  Here we discuss killers, kick ass battle music, random characters, and why the right music is necessary to strip properly. Here, we cover two icons when we dismantle Freddy vs. Jason and Rob Zombie's Halloween.  We also get happy about our childhoods and talk about the 1986 Transformers movie.  I also introduce a new annual segment to the show known as Full Moon Fever with my main man, Jesse Bollinger. We might actually talk about the films for about 70 percent of the show and that ain't bad.  Life is all about tangents.  So if like blood, violence, mustached robots, songs about servicing lady parts, and a whole lot more, download this show

Music
The Fight Song - Marilyn Manson - From "Holy Wood (in the Valley of the Shadow of Death)"
He's Back (The Man Behind the Mask) - Alice Cooper- From the album "Constrictor"
My Neck, My Back (Lick It) - Richard Cheese and Lounge Against the Machine - From "OK Bartender"
Transformers Theme (Movie Metal Remix) - Lion - From "Transformers '86 OST"

Jesse Bollinger
Twitter @TheJesseb83
Show the blind one some love or hate through E-Mail
Talk shit to the dirty trio of the Moviecopia! Podcast
Download Moviecopia! here.
Get funky with the squach and other things that lurk in the dark!
Listen to Jesse and Kelly slap the skeptics in the mouth with some knowledge!

We are also available on Talkshoe and now on ITunes!

Posted by cinemabeefpodcast at 2:41 PM No comments: