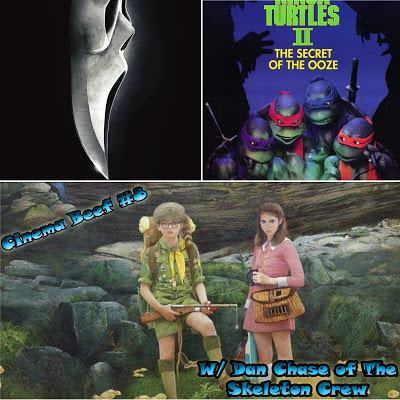 Gary
Find me on Facebook as Gary Hill and on Twitter @GDubby
Get the show here.
Get the RSS feed here.
Join the Facebook group!
Send me show ideas, feedback and requests to be on the show. I am always looking for new co-hosts.

Find us on iTunes, Talkshoe and Stitcher radio.  Please leave us glowing reviews!

Posted by cinemabeefpodcast at 7:15 AM No comments: 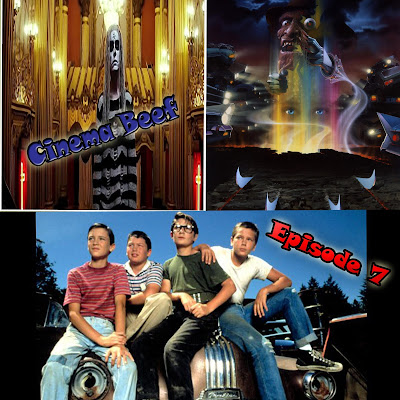 An extra large episode 7 is here! I am joined this time by future podcaster and staple on the Dirty Bay Horror Podcast, Dave Z. Just like almost every one of my shows, we discuss three films. We start with a film that I said I would never discuss again but the guest decided to torture me. We talked about you guessed it, Rob Zombie's horror swan song Lords of Salem! Next, we go into dreamland and check out those crazy kids on Elm St. when we discuss the fourth installment, The Dream Master. Finally, we say hello to Mr. King and check out our own childhood demons when we discuss Rob Reiner's classic Stand By Me. So, don't play records from strangers, drink lots and lots of Red Bull, and never bury your life savings under the porch.

Gary
Follow me on Twitter @GDubby and find me on Facebook as Gary Hill
Get the show here!
Get the RSS Feed!
Join the Cinema Beef Facebook Group!
If you have feedback or you want to be on the show, e-mail me here!

You can also get us on iTunes, Talkshoe, and Stitcher smart radio!
Posted by cinemabeefpodcast at 10:17 AM No comments: 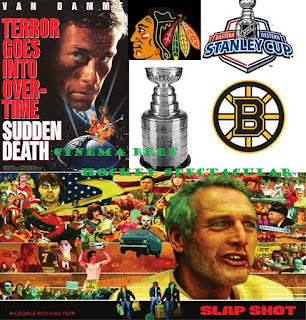 Well, on this show we celebrate all things hockey. I am joined by none other than "Midnight" Corey Graham. Welcome to the Cinema Beef Hockey Spectacular! We talk about the seasons and players of our respective teams and we even show the Boston Bruins some love in the process. We also discuss two films......eventually. We cover the 1995 action romp Sudden Death starring Jean-Claude Van Damme. We also praise those lovable Charlestown Chiefs when we go off on the 1977 sports comedy Slap Shot starring Paul Newman. So lace up your skates, put on your horn-rimmed glasses and hit the ice. This might get bloddy, old school style!

Gary
Hit me up on FaceBook as Gary Hill and on Twitter @GDubby
Get the show here and all of the past insanity!
Get the RSS feed here!
Join the Cinema Beef Facebook group.
Hit me up on an email if you want to be on the show or if you have good or bad feedback.

Corey
Hit Corey up on Facebook as Corey Graham and on Twitter as @CoreyBGraham
Find Corey's show The Electric Chair and show him some love.
Also, check out Corey, Jamie and Mike on Evil Episodes!
Contact Corey right here!


Posted by cinemabeefpodcast at 5:13 PM No comments:

Hey kids! It's a random show about crazy doctors! That is all. 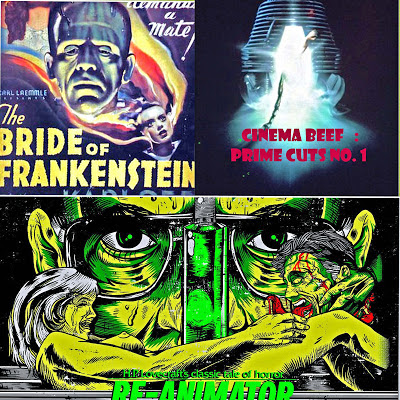 On the inaugural episode of Prime Cuts, "Wildman" Willis, "The Blind Critic" Jesse and I explore and praise three mad scientist films. We do the 1985 gore filled classic Reanimator featuring Jeffrey Combs and severed head oral sex. Oh joy! We cover Cronenberg's accidental freak of nature film The Fly from 1986. Finally, we delve into the Universal monsters films when we discuss the 1935 horror staple Bride of Frankenstein. The reviews are kind of short and sweet but this is my first show like this one. You do get a Bruno Mars song at no extra cost though. Aren't you excited!

Get the current episode and all the rest here!
Check out Willis and the gang on the Terror Troop!
Listen to Iris and Jesse's antics on Moviecopia!
Throw me a line and please come on the show!

You can also subscribe on iTunes and also on Stitcher!  Please give us  a glowing review!

Posted by cinemabeefpodcast at 2:48 PM No comments:

Blood, Scars and Whacked Out Conspiracies 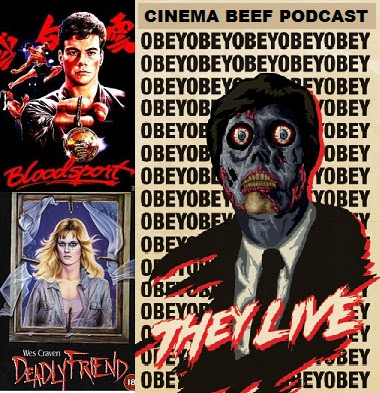 In this edition, we get all political on your asses!  I am chatting with none other than Jamie Jenkins, a woman much more talented than myself in more ways than one.  On this one, I divulge my love/hate relationship with the Wes Craven 80s, robot-centric film Deadly Friend starring Kristy Swanson.  We also learn that Jamie loathes the man known as "the muscles from Brussels" as we discuss the martial arts dynamo known as Bloodsport.  Finally, we discuss the alien invasion film They Live featuring that crazy Scot, "Rowdy" Roddy Piper. We go on some interesting tangents during all these reviews, including a Jamie Ric Flair impression. So put on your shades, practice your signature splits, and always put on rubber gloves while cleaning up your zombie girlfriend's murder scenes! Happy listening and click on the "Fight to Survive" Bloodsport link and see a great fight montage from the film.


Gary's Contact Info
Find me on Facebook as Gary Hill and on Twitter @GDubby
Get the show here!
Get the RSS feed here.
Join the Cinema Beef Facebook group!
Give me show suggestions or feedback here and make your reservation to be on the show and join the insanity!

Jamie's Contact Info
Find her on Facebook as Jamie D Jenkins and on Twitter @Maven1974
You can get all of Jamie's shows with this link. Except her multiple guest spots, of course.
Help loosen Jamie's shackles and hit up Alex and Dan as well on The Skeleton Crew Facebook group!
Join David, Bo and Jamie on the Devour the Podcast Facebook group!
Check out Jamie's latest incarnation celebrating all things werewolf and join the Lycan It group!
Send Jamie sweet nothings through e-mail. Like she needs the encouragement.


Please check out The Phantom Erik's great show 100 Years of Horror. I hear it is great and even stays crunchy in milk!

Special thanks to Iris for doing the art for the show.


Posted by cinemabeefpodcast at 12:53 PM No comments: