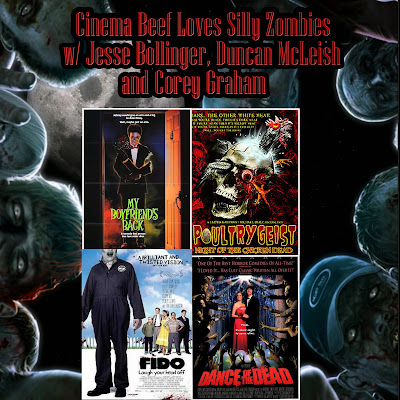 Posted by cinemabeefpodcast at 5:16 PM No comments: 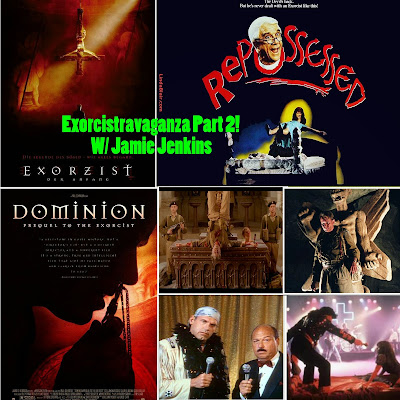 Hello Beefers! Hope you enjoyed part one of this show. Part two is just as good but more compact! Jamie Jenkins is back this time around to bring the heat and whole lot more. On this edition, we have a comparison review of the two almost identical Exorcist prequels. Also, we take it home when we discuss the crude and outrageous parody film about life after possession when we review Repossessed! Hope you guys like it!

Find me on Facebook as Gary Hill and on Twitter @GDubby
Join the Facebook group!
Hit me up with some feedback, film suggestions for us to review or requests to be a cinema combatant!

Jamie
Find her on Facebook as Jamie Jenkins or on Twitter @maven1974
Get all of her various shows on the Horrorphilia Network!
Hit up Alex and Dan as well and become a bonehead like the rest of us!
Check out Jamie, David and Bo on the Devour the Podcast group!
Join the Lycan It! group! It could get hairy!

Get the episode here!
Get the RSS feed here
Find Cinema Beef on Horrorphila!


Posted by cinemabeefpodcast at 3:14 PM No comments: 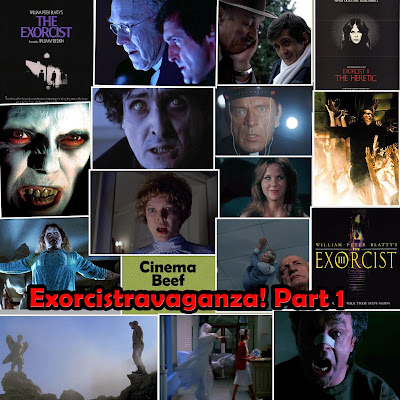 Hello listeners and welcome to this grand experiment! This is a first time for anyone to do this according to my co-host, Jamie! This is part one of Exorcistravaganza! Try saying that five times fast! The show in which we discuss all the Exorcist films, including both prequels and Repossessed! Jamie assures me this has never been done before so it should be fun. This episode also includes the very Jamie-centric interview with "The Face of Death" herself, Eileen Dietz! So, pack your holy water and shine up your crucifixes. It's gonna get all spiritual up in this bitch!

Gary
Find me on Facebook as Gary Hill and on Twitter @ GDubby
Join the Cinema Beef Facebook Group!
If you have comments, suggestions for the show or even if you want to be on the show, shoot me an email!

Jamie
Find her on Facebook as Jamie Jenkins and on Twitter @maven1974
Find all of Jamie's shows and lots of other great ones on the Horrorphilia network!
Join the Skeleton Crew group!
Join the Devour the Podcast group!
Join the Lycan It group!

Eileen Dietz
On Facebook as Eileen Dietz
Check out her website!
Check out and purchase Eileen's book "Exorcising Her Demons" She'll even sign it for ya!

Shoot me a voice mail and say hello.  It would be great to hear from you!  Call me at 708 740-0045!
Show us some love and give us a rating on iTunes and Stitcher!
Posted by cinemabeefpodcast at 10:06 AM No comments: 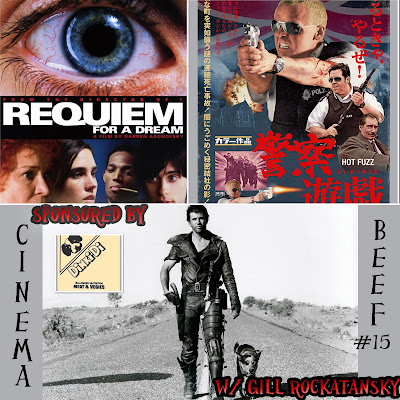 It's another international incident when I chat in great length with Gill Rockatansky of Gill and Roscoe's Bodacious Horror Podcast! We talk about many things including hot tub etiquette, Bob Dylan and oh yeah we talk about films as well. On this edition, we open with the drug-laced bowl of drearios known as Requiem for a Dream from 2000. Next, we go blasting through the UK with pens and guns blazing when we discuss Hot Fuzz from 2007. Finally, we become warriors of the wasteland when we get to laugh and pillage about The Road Warrior A.K.A. Mad Max 2! So, find your dealer, never trust your local government and always fill up on gas!

Gary
Find me on Facebook as Gary Hill and on Twitter @GDubby
Join the Facebook page!
Email me with feedback, complaints, cash donations, sexual favors or suggestions or to even be on the show.

Get the show here!
RSS Feed

You can get my show, Gill's show and tons of others on the Horrorphilia Network of Podcasting!

Show us some love on iTunes and Stitcher!


Posted by cinemabeefpodcast at 5:15 PM No comments: