Flex Your Guns and Shoot Up! 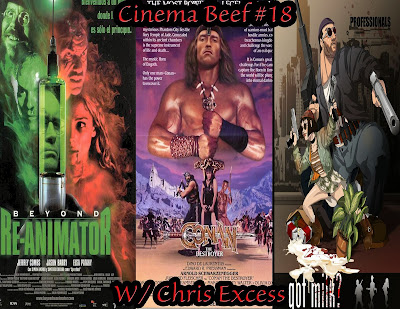 Your humble host is back, head cold and all.  I apologize ahead of time for that.  I am joined by the awesome and chatty, but not in a bad way, Mr. Chris Excess of Terror Troop.  The pride of Mexico City and I have got some wonderful selections for you this time around that will stimulate the senses!  First, Dr. West is back and he is shaking up the prison system in Beyond Re-Animator!  Next, Conan is back with a brand new set of commandos to find treasure and to punch animals in Conan the Destroyer! Finally, Chris and I have a love fest for Luc Besson when we discuss houseplants, guns and the how milk can make you the best assassin ever in Leon: The Professional!  On this episode, I also announce Cinema Beef’s first giveaway!  Thanks for all the love, support and patience.

Find this show and lots of other great ones on the brand new League of Extraordinary Podcasts!
Get this show here!
RSS Feed
Posted by cinemabeefpodcast at 4:54 PM No comments:

What th Hell Did Moe Make Me Watch?! 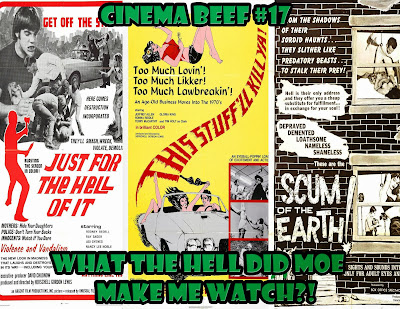 Episode 17 is here and I'm glad you are all are still with us. This time with a brand-new guest! Is the bearded master of all things VHS, Mr. Moe Porne! On this show, I am graced with three virgin watches in a Herschell Gordon Lewis triple bill! We take in preachers, revenuers and the worship of white lightning in This Stuff'll Kill Ya. Next, mean teens are angry and they take it out on everything and everyone in Just For the Hell of It. Last, we dive into the world of seedy photographers and rapey eyes
in Scum of the Earth! I can say 2 out of 3 of these are must sees. Listen to find out which ones!

Find me on Facebook as Gary Hill and on Twitter @GDubby
Join the Cinema Beef group!
Give Sausagefest Reviews a try. All meat, no kraut!
E-mail me with show suggestions, feedback and requests to be guests on the show. 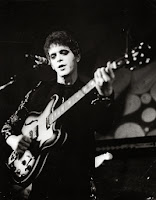 Get the show here
RSS Feed
Posted by cinemabeefpodcast at 2:10 PM No comments: 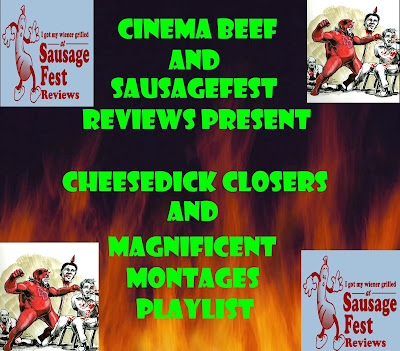 Remember the days when films had those songs that would come up when the characters were either working out or doing a project of just trying to real some insurmountable goal? Do you remember those often cheesy end of film songs?  Then, this is the playlist to feed your appetite!  This is 20 tracks that I hope will keep you unnecessarily motivated for at least an hour and 40 minutes.  Then, you're on your own.  Or just start it all over again!  Here is the track listing!

T These songs are almost guaranteed to stay in your head so you're welcome!  Hope you have a great time going down that long strange trip down memory lane.  Thanks for listening.

Posted by cinemabeefpodcast at 2:31 PM No comments: 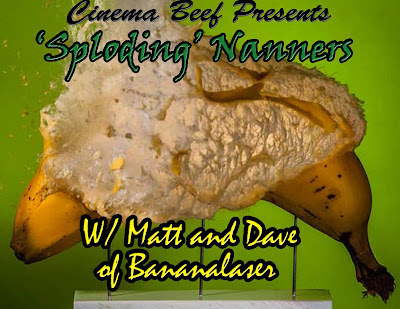 Here it is folks! One month in the works! It's the Cinema Beef/Bananalaser crossover episode! It's so jam-packed with controversy that it had to broken up in three parts! We let go of some of our deepest obsessions in pop culture in this our Guilty Pleasures episode! You'll hear outrageous thoughts on what we like from television, film and music that might make us lose some street cred. Also, you get to hear 11 of the finest podcasters that I have the pleasure of knowing get ambushed with 4 questionable questions each in a segment called Confessions of a Podcaster! Their answers may surprise you!  Hope you all enjoy!

Gary
Hit me up on Facebook as Gary Hill and on Twitter @GDubby
Join the Cinema Beef group!
Check out Willis and I on Sausagefest Reviews!
E-mail me here!

Join the Bananalaser Facebook group!
Get Bananalaser and tons of other great shows on the Horrorphilia Network of Podcasting!
Bananalaser RSS Feed
E-mail Matt and Dave here.

Posted by cinemabeefpodcast at 1:34 PM No comments: